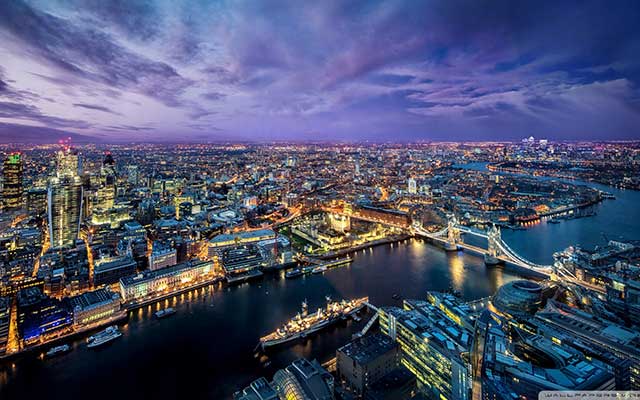 Used extensively as investment vehicles, hedge funds can be somewhat complex in nature. This is particularly true when financial leverage is introduced. In the most basic form, leverage refers to using debt as an additional source of funds for investing in a portfolio. Put another way, leverage refers to the use of borrowing funds for the purpose of magnifying investment performance. This type of strategy forms a critical part of the way in which hedge funds operate. Even so, the use of too much leverage can result in an increase in losses. In some instances, the use of leverage can also result in fund failures, which has proven to be a problem historically.

What Is Financial Leverage?

How Is Leverage Used by Hedge Funds?

Hedge funds are not as regulated as mutual funds. For instance, Hedge Funds typically use short selling and derivatives strategies, something not allowed with mutual funds. Some hedge funds do invest in more traditional securities, including bonds, stocks, real estate, and commodities. Many hedge funds often use what are known as long-short strategies, which involve investing in a balance of long and short positions, and refers to selling stocks using borrowed money and then buying back those stocks when the price has fallen. It is quite common for hedge funds to utilize leverage across various funding vehicles. While investing using borrowed money offers the opportunity to increase return potential significantly, it also results in a greater risk of loss. This is actually where hedge funds derive their names, because such funds attempt to increase gains while offsetting losses by “hedging” investments utilizing a variety of techniques, including leverage. The vast majority of funds utilize between one to two times their investment capital, or a 10- to 20-percent margin to equity.

What Are the Most Leveraged Hedge Funds? 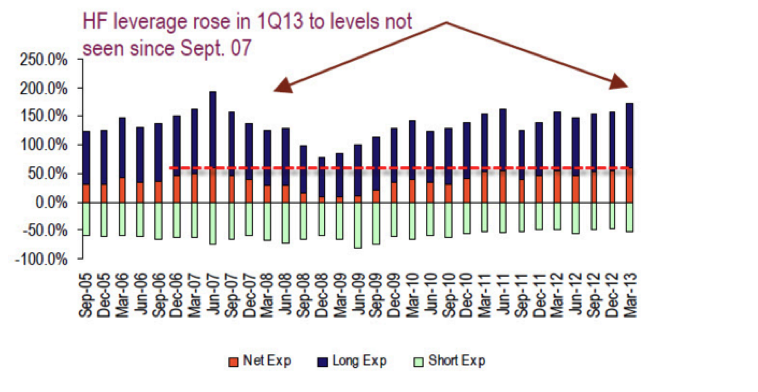 The previous year, the emergence of an upward  trend in the use of leverage among hedge funds was noticed and reported by Reuters, following a spike in August. This was viewed as an indication that hedge funds had become more willing to use borrowed funds in an effort to amplify returns. Investors had previously reduced their use of leverage between 2009 and 2010, with the use of leverage not increasing until the summer of 2011.(4)

What Are the Main Benefits of Using Leverage in an Investment Portfolio?

Many hedge funds utilize leverage for a variety of purposes, including enhancing returns on assets that might not be sufficiently high to attract funding without an unlevered basis. Leverage effectively serves the purpose of dampening or amplifying market risk while simultaneously allowing funds the opportunity to gain exposure at levels that exceed their capital base. Hedge funds often utilize leverage for the purpose of targeting a level of return sought by investors. Leverage is also used by hedge funds to take advantage of mispricing opportunities. This is accomplished by purchasing assets believed to be underpriced while at the same time shorting assets that are believed to be overpriced. By manipulating leverage dynamically, hedge funds are able to respond more effectively to rapidly changing investment opportunities.

What Are the Risks and Downsides of Using Leverage?

While leverage in hedge funds clearly presents a number of benefits and opportunities, there are also risks and downsides that should be considered. The reality is that leverage can have a negative impact on a financial portfolio. In most cases, risk management of any leverage strategy is based on historical behaviors and movements of the relevant investment instrument. Although some risk management models are simple in nature, others can be quite complex. All such models are dependent upon the assumption that historical behavior patterns will reoccur. Ultimately, however, it all comes down to predictions. Margin calls are typically a reality of utilizing leverage. A historical overview of hedge fund failures proves that most such failures were the result of the funds being unable to meet margin calls. Since hedge funds are typically levered to a total fund level, most such funds do not have large amounts of cash lying around.(5)

The lure of large returns often attracts investors to hedge funds. During the financial crisis of 2008, it was not uncommon for hedge funds to report returns of at least 300 percent using a strategy involving shorting housing and financial stocks.(6) In order to obtain returns that high, hedge fund managers had to ensure that they were accurate in their assessment of those stocks. In the last few years, hedge funds have not performed nearly as well. In 2015, hedge funds posted their lowest returns in four years.(7)

Of course, the use of leverage by hedge funds is fairly routine. Practically all hedge funds use leverage, at least to some degree. As the Financial Post points out, however, taking such extremely concentrated positions is akin to betting against stocks. When a hedge fund is accurate, or in other words when it wins, the use of leverage makes it possible for such funds to generate tremendous investment returns. Naturally, hedge fund managers bring in massive performance fees, as well. A typical performance fee for mutual fund hedge managers follows a rule known as 2 & 20. In this type of fee structure, the manager receives a 2-percent management fee in addition to 20 percent of any gains.(8)

Not all hedge funds are accurate in the positions they take, however. When a hedge fund manager is incorrect in his or her assessment, it is the investor who loses. The Financial Post recommends that investors exercise caution and ensure that any hedge fund they are considering purchasing actually hedges rather than beds. As complex and challenging as the market is today, it can be difficult enough to generate a return with even standard investments.(9)

An academic research paper published by the University of Brussels further concluded that investors should be cautious regarding the amount of leverage a fund is able to take. The paper goes on to state that this does not mean that investors should steer away from the use of leveraged funds. Investors naturally seek out the combination of risk and return that will deliver at the highest levels. Even so, caution should be exercised.(10)

Access to hedge funds has also remained largely limited. As CNBC points out, true hedge funds are still only available to investors with an annual income of $200,000 or more, or a net worth of more than $1 million. As competition for assets has risen, investment minimums for some hedge funds has declined, but even so, the largest as well as the most successful funds still require investors to have at least $500,000. The most important step investors can take is to ensure that they do their homework and research prospective hedge funds thoroughly. With approximately 15,000 hedge funds now managing money, it can be a time-consuming process.(11)

Historical Use of Leverage

Hedge funds first made their way onto the investment scene in 1948 when Alfred Jones began exploring investment trends of the time while working on the editorial staff at Fortune magazine. It was then that Jones became inspired to try managing money on his own. After raising $100,000, Jones began working toward the goal of minimizing the risk of holding long-term stock positions using a strategy that involved short selling other stocks. Today, this strategy is known as the classic long/short equities model. In an attempt to enhance returns, Jones also utilized leverage in his money management approach. Within a few years, Jones had made some changes to his investment method, switching from a general partnership to a limited partnership. He also added a 20-percent incentive fee for managing partners, creating the first money manager that combined the use of leverage, short selling, and shared risk via a partnership. As a result, Jones is recognized today as the Father of the Hedge Fund.

By the late 1960s, the hedge fund industry was in full swing with some 140 funds in operation. Later, many hedge funds steered away from the strategy crafted by Jones, in an effort to maximize returns, and opted to utilize greater levels of long-term leverage. These strategies eventually resulted in heavy losses between 1969 and 1970, during what came to be known as the Nixon Recession, a result of increasing inflation. During that time, the government employed an extremely restrictive monetary policy. That, combined with the way in which government expenditures were structured, resulted in even more economic contraction.(12) As a result, numerous hedge funds closed between 1973 and 1974.

For the next couple of years, the industry remained largely quiet. In fact, it was not until the mid-1980s that the double-digit performance of the Tiger Fund drew the attention of the public. By the early 1990s, the hedge fund industry was flying high once again. Unfortunately, that period was followed by a number of serious failures during the late 1990s and early 2000s, coinciding at the same time as the technology bubble burst.(13), (14) 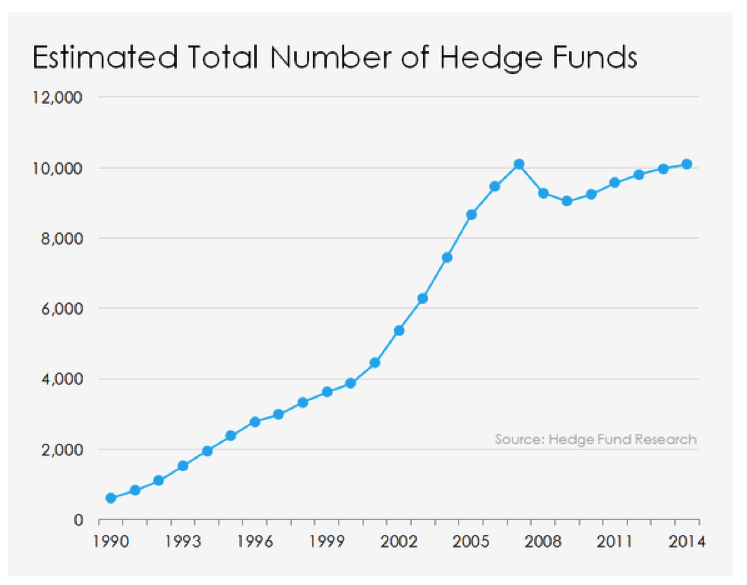 Please note that BT Global Growth Fund is  unlevered. The Fund does not use leverage to generate investment returns.

If you have any questions about hedge funds or if you would like to discuss how investing in a hedge fund can complement your existing portfolio and investment strategies, we invite you to contact us today.

What is a market-neutral investment strategy?